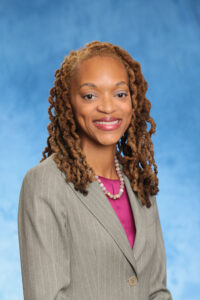 Jelani Jefferson Exum joined the Detroit Mercy Law faculty as the Philip J. McElroy Professor of Law in 2019.  She is a nationally recognized expert in sentencing law and procedure.  Professor Exum is a member of the Editorial Board of the Federal Sentencing Reporter, and her work has been featured on prominent sentencing blogs, such Sentencing Law and Policy.  She is a graduate of Harvard Law School and graduated magna cum laude from Harvard College. Prior to joining the Detroit Mercy Law faculty, she was a Professor of Law and Associate Dean for Diversity and Inclusion at the University of Toledo College of Law, an associate professor at the University of Kansas School of Law, and a visiting associate professor at the University of Michigan Law School.  Professor Exum has also been a Forrester Fellow and Instructor in Legal Writing at Tulane Law School.

Before joining academia, Professor Exum served as a law clerk for the Honorable James L. Dennis, United States Circuit Judge for the for the Fifth Circuit Court of Appeals, and the Honorable Eldon E. Fallon, United States District Judge for the Eastern District of Louisiana. She has taught Constitutional Law, Criminal Law, Criminal Procedure, Comparative Criminal Procedure, Federal Sentencing, and Race and American Law. Professor Exum mainly writes in the area of sentencing law and policy, but her research interests also include comparative criminal law and procedure, policing, and the impact of race on criminal justice.

Winner of the NAPD Defender of Justice Award for Outstanding Work in Public Defense.