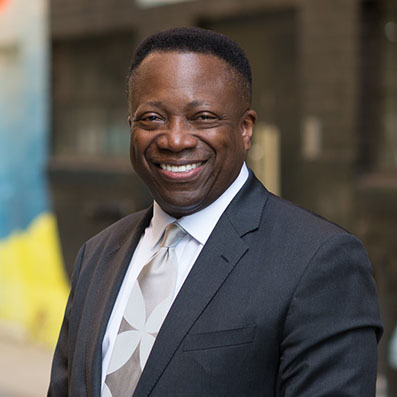 Rainy Hamilton, Jr. is a native Detroiter and graduate of the University of Detroit-Mercy School of Architecture. Rainy has a comprehensive understanding of the design  industry and has built a national practice that has created award winning designs in  the areas of entertainment/hospitality, higher education, residential and recreational  facilities. He has a keen ability to quickly develop design solutions, organize and solve  complex issues and craft solutions that are environmentally responsible and financially feasible.

Mr. Hamilton established his own Detroit-based architectural firm as a solo practitioner in 1993. Since that time, Hamilton Anderson Associates (HAA) has grown to include over 50 full-time employees with an office in Atlanta, GA. Hamilton Anderson’s mission is to contribute to the positive evolution of urban environments and progressive  social cultures. The firm has been active in the rebuilding of the economic and physical fabric of Detroit, working on such projects as City Modern, Little Caesars Arena,  Elton Park Mixed Use Development, the Detroit / Wayne County Port Authority, MGM  Grand Detroit Casino, the Detroit School of Arts, and the Hudson’s Redevelopment  Project.

Rainy’s dedication to his profession is illustrated by his activities in the professional arena. In 2012, Rainy was elevated to Fellow by the American Institute of Architects,  and in 2013 he received the AIA Detroit Gold Medal award. Rainy served as President  of the Detroit Chapter of the American Institute of Architects in 2001, the first African  American to serve in this position. Rainy has been active with the National Organization of Minority Architects (NOMA), he spearheaded the formation of the Detroit chapter, serving as its President in 2012, and hosted the 40th National Conference and Expo. Rainy’s community involvement also includes serving as a board member for several community based organizations.

Winner of the NAPD Defender of Justice Award for Outstanding Work in Public Defense.