Just Three Percent of Cases Go to Trial. A New Paper Unpacks How That Hurts Poor People of Color

By Rick Jones and Cornelius Cornelssen 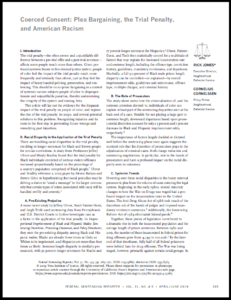 Despite what courtroom dramas on television and celebrity travails might lead you to believe, the number of individuals who actually exercise their right to take a criminal charge to trial is disturbingly small.  Studies show that a mere three percent of federal cases go to trial. The rest end in a plea bargain.  At the heart of these pronounced numbers is the frequently-cited discretion of prosecutors to make charging decisions, effectively punishing an individual with the threat of a longer sentence if they take their case to trial and fail to prevail. This phenomenon has been coined the “trial penalty.” And much like other areas of law enforcement and the legal system, the trial penalty is applied unequally, impacting communities of color at a greater frequency and with harsher sentences.

Our new paper, “Coerced Consent: Plea Bargaining, the Trial Penalty, and American Racism,” in the Federal Sentencing Reporter unpacks the implications of the trial penalty. We outline the injustice it causes while simultaneously pushing for necessary reforms both modest, like more just discovery processes, and sweeping, like substantial social investment to address poverty mental health, addiction and more before they are dropped on the courthouse doorstep.

Studies show that Black and Brown people fare worse than whites at several juncture points in the criminal legal system. A study from Professors Jeffery Ulmer and Mindy Bradley found that the trial penalty for Black individuals convicted of serious violent offenses increased proportionally based on the percentage of a county’s population comprised of Black people.  Ulmer and Bradley reference a 2005 paper by Steven Barkan and Steven Cohn in hypothesizing that racial prejudice may be driving a desire to “send a message” to the larger community that certain types of crime (alleged to have been committed by people of color) will be handled swiftly and severely.

Even the benefits of plea bargaining are applied at disparate rates. Downward departures based upon prosecutorial discretion, which are notable for playing a large part in sentence length generally, account for only a 5 percent and 1 percent decrease in Black and Hispanic imprisonment odds, respectively. A report by the United States Sentencing Commission found that, in fiscal year 2016, only 12.4 percent of Blacks facing a mandatory minimum drug sentence received safety valve relief, while the number for Whites was 16.5 percent.

One of the more distressing elements of the trial penalty is the seeming resignation of the judiciary to its outsized role in the legal system. In the 1960’s and 1970’s, the Supreme Court seemed intent on protecting people from “vindictive” behavior by prosecutors. By the late 1970’s, however, the Court had turned and with Bordenkircher v. Hayes it yielded to plea bargaining. Viewed alongside the rise of sentencing guidelines, mandatory minimums and the increase in cases from the racially charged War on Drugs, the pressure to plea can be suffocating at both the systemic and individual levels.

Efforts to address the trial penalty often include recommendations to give judges a greater role in the plea bargaining process, balancing the sharing of information to allow more informed pleading decisions for the defense and addressing sentencing laws. At a more fundamental level, however, reform must include right-sizing the legal system. Courts should not be the drop off point for societal challenges such as mental health issues, poverty and racism; robust social support structures are a baseline necessity that benefit everyone in society.