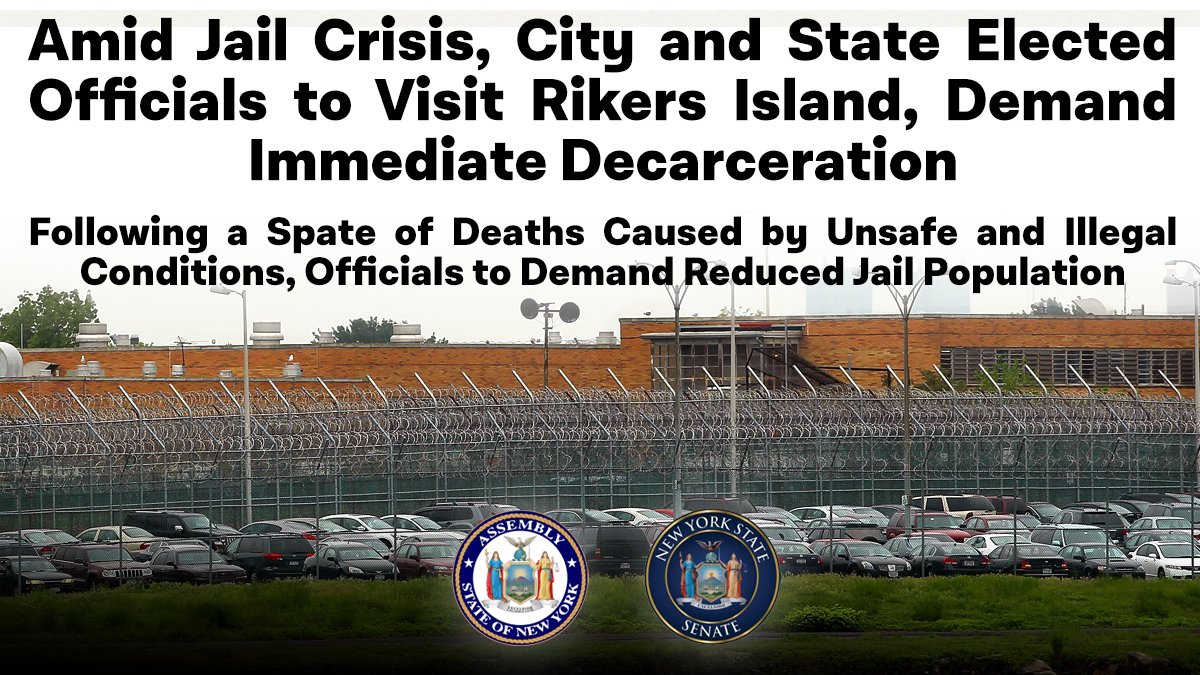 NEW YORK— A contingent of 11 elected officials will visit Rikers Island on Monday, September 13 at 9 AM. Following their visit, they will hold a press conference to discuss the illegal and unsafe conditions in the jail, and call on the city and State governments to use every tool at their disposal to immediately release people from the extreme and dangerous conditions at Rikers. The press conference is scheduled for Monday, September 13 at 1 PM and will be held just outside Rikers Island, on the corner of 19th Avenue and Hazen Street in Queens. The elected officials will be joined by public defenders and Min. Dr. Victoria Phillips of the Jails Action Coalition.

Who: Speakers at the press conference include:

What: The conditions on Rikers Island are dangerous and illegal, and releasing people from the jails to alleviate the stress on a deeply flawed and inhumane system is a matter of life and death. The jail itself is dangerously overcrowded, with a population that has surged to more than 6,000 people, above pre-pandemic levels.

The deadly Delta variant continues to threaten the lives of incarcerated New Yorkers, a threat exacerbated by the failure of DOC staff to ensure people have access to basic human needs. Their refusal has left incarcerated people without adequate food, medical attention, or access to other basic services that the City is legally and ethically required to provide. Clients are missing court appearances, being denied access to counsel, being denied any chance to go outside for recreation for months on end, and being subjected to a broken and inhumane intake process: rather than being processed and housed within hours, newly incarcerated people are caught in a limbo, held in squalid conditions in intake for weeks on end.

These violations are manifesting in unimaginable suffering and a wave of deaths on Rikers. Nine people have died in DOC custody this year, and three on Rikers in the past month, with self-harm reaching an alarming rate of 95 incidents per 1,000 people.

The elected officials are visiting Rikers Island to witness these conditions first-hand and to call for immediate decarceration. These demands include: