Following Bombshell Report on COVID Deaths on Rikers Island, Officials Must Address the Deadly Conditions That Persist in Jails and Prisons 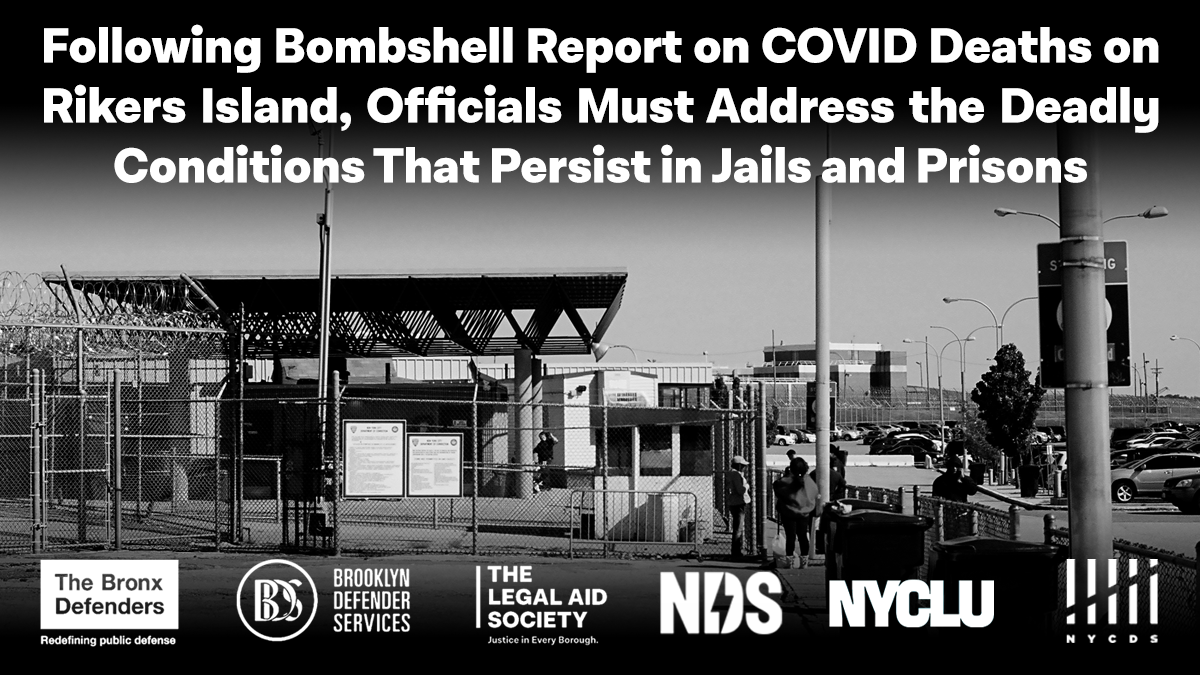 (NEW YORK, NY) – Today, THE CITY reported on an unreleased Board of Correction (BOC) investigation into three deaths that occurred in Department of Correction (DOC) custody last year. The men died at the beginning of the COVID-19 pandemic in conditions exacerbated by a series of DOC failures, the report shows.

The investigation details a complete disregard of social distance measures; severe overcrowding; an inability to keep facilities clean; a failure to distribute masks; and a denial of necessary treatment to people with underlying respiratory conditions. Read the full report here.

“The Board of Correction report is an indictment of our city’s failure to keep incarcerated people safe from COVID-19, a failure that killed three men and jeopardized the health and safety of thousands more–both in and outside the jails. It is especially damning that the crowded housing areas detailed in the report, which the Board determined played a significant role in killing these men in March and April 2020, are virtually indistinguishable from the conditions in jails a year later. The failure to decarcerate will kill again if leaders do not act now.

City and state officials must immediately reduce the incarcerated population, offer the COVID-19 vaccine to every incarcerated or detained person in New York, and pass the Less is More Act.

As detailed in affidavits included with the lawsuit brought against the state last month, incarcerated people remain held in dorms stuffed well past a safe capacity, a year after three people died of COVID as a result of overcrowding. People are still unable to maintain sufficient social distance to protect themselves from this deadly virus, or to access other critical protective measures — such as masks or hand sanitizer.  Cleaning protocols fall woefully short as well, including residents being unable to clean their own areas due to lack of cleaning supplies.

It is impossible to distinguish the report’s findings on jail conditions in March 2020 from recent evidence on the conditions inside DOC facilities. One of the named petitioners in our lawsuit against the state, Alberto Frias, said on February 4, 2021 that Rikers Island ‘is very unsanitary and risky.’ He added: ‘It is impossible to stay six feet apart. You eat together, you use the same showers. DOC does not supply masks within the housing area, so people are walking around without masks.’

Charles Holden, another petitioner, added: ‘My dorm is nearly full, we sleep in beds that are inches apart and people are unable to wear masks.’

The demonstrated failure to address these conditions and provide adequate protections for a full year violates the rights of every person held on Rikers Island, and each passing day of blatant disregard threatens their lives. Given the reality of jail churn, with new people being incarcerated and released every day and staff cycling in and out, we know that the dangers of outbreaks behind bars extend to the broader community as well.

The city must reduce the jail population immediately. After reducing the population this spring, numbers have once again surged above pre-pandemic levels, creating exactly the sort of dangerous overcrowding that contributed to deaths earlier in this pandemic. Our representatives must release those held on pretrial detention, those held on technical parole violations, and those who have medical conditions that leave them particularly vulnerable to COVID-19.

The state must begin offering the vaccine to every single person incarcerated in New York. Its failure to do so violates the  rights of people held in jails and prisons, as we argue in the ongoing suit. The BOC report underlines the urgency, uncovering deadly conditions in the city jails and the ongoing failure to address that reality. Access to the vaccine, while not a panacea, is an important step towards dramatically reducing the risk this failure poses.

Finally, legislators must pass the Less is More Act, which would nearly eliminate the unnecessary and racialized incarceration of hundreds of people for technical parole violations, like missing an appointment with a parole officer, being late for curfew, or testing positive for alcohol or other drugs. New York incarcerated more people for these minor infractions than  any other state in the country and this legislation must be passed urgently Michael Tyson, one of the men whose death is detailed in the BOC report, was jailed on Rikers because he failed to report to a parole officer. The Less is More Act will help prevent more senseless deaths ,, while also reducing the jail and prison population dramatically, making room for some distancing.

We are dismayed, but sadly not surprised, by DOC’s failure to protect the people in its custody. Since the start of the pandemic, we have repeatedly raised the alarm about the deadly conditions inside jails and prisons to district attorneys and criminal courts, to our elected officials, to the general public, and through countless lawsuits. BOC’s findings echo our concerns exactly. It should not take three deaths, and immeasurable suffering, to right these egregious wrongs, and we cannot wait for the death toll to climb higher still. We demand city and state officials finally take this emergency situation seriously and protect incarcerated New Yorkers.”