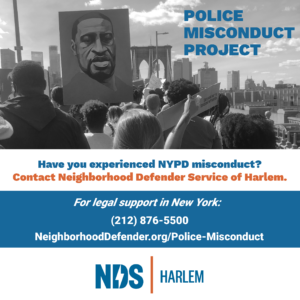 (New York, NY) – Police harassment, brutality, racism and even murder has inflicted enormous pain on the community Neighborhood Defender Service of Harlem (NDS) serves, particularly the Black community. That pain is compounded by the impunity with which the NYPD operates: there is seldom accountability for outright violence at the hands of the police, let alone the constant harassment communities of color endure. This lack of accountability not only insulates individual officers from justice, but it enshrines unjust, illegal police behavior and terrorizes Black and brown communities.

NDS today announced the launch of its Police Misconduct Program. Effective immediately, New Yorkers who have experienced police misconduct can now use NDS as a resource in filing an action for police accountability.

While the long-overdue repeal of 50-A removes a tool NYPD has used to set its officers above the law, it is far too modest a change to reckon with the massive injustice police impunity has wrought. That is why NDS will help New Yorkers file actions to secure justice, protect our communities and fight back against rampant police misconduct. New Yorkers can call NDS at (212) 876-5500 or visit NeighborhoodDefender.org/Police-Misconduct for legal support.

NDS is launching this critical service on Juneteenth, a celebration of the abolition of slavery in the United States. The freedom that abolition was meant to bring has yet to be fully realized, and state racism enforced by the police is to blame. As members of New York’s defense community, NDS bears witness to the violence of structural racism every day, and stands ready to support our neighbors in their efforts to secure accountability and build a more just world.

“From violent murders to more common harassment, our communities endure horrific, unjust, and racist treatment at the hands of the police. By seeking justice for these abuses, we hope to work with our clients in dismantling the culture of impunity and racism that fuels misconduct,” said Alice Fontier, Managing Director of NDS Harlem. “By launching this project on Juneteenth, we stand in solidarity with our neighbors in Harlem and with the broader Black Lives Matter movement in fighting for an end to police impunity and building a world in which our community members can support each other and thrive without the constant threat of state violence.”

For legal support in response to police misconduct, call NDS at (212) 876-5500 or visit NeighborhoodDefender.org/Police-Misconduct for legal support.