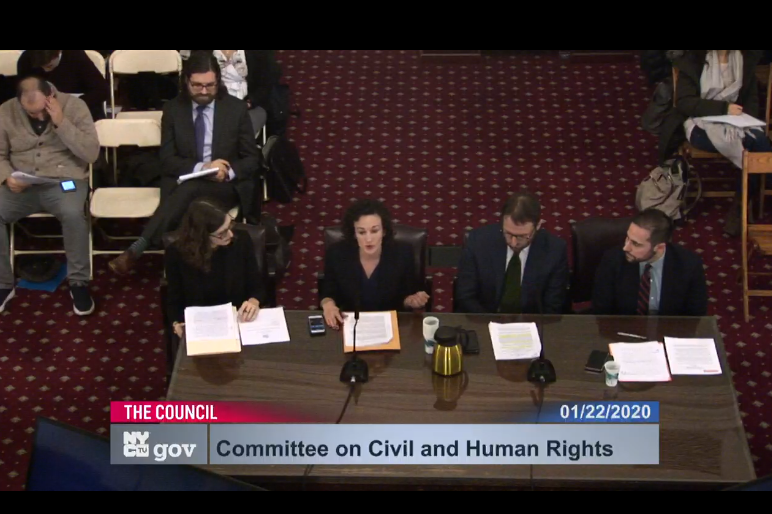 Emily Ponder Williams, Managing Attorney of NDS’ Civil Defense Practice, testified before the New York City Council’s Committee on Civil and Human Rights this week on amendments to the NYC Human Rights Law. The amendments would prohibit discrimination against New Yorkers on the basis of open criminal charges, violations, and Adjournment in Contemplation of Dismissal.  Read her full testimony below.

I am Emily Ponder Williams, Managing Attorney in the Civil Defense Practice at the Neighborhood Defender Service of Harlem (NDS). NDS is a community-based public defender office that provides high-quality legal services to residents of Northern Manhattan. Since 1990, NDS has been working to improve the quality and depth of criminal and civil defense representation for those unable to afford an attorney through holistic, cross-practice representation. As part of its holistic mission, NDS’s Civil Defense Practice provides consultations, advocacy, and legal representation to clients facing the collateral consequences of an arrest or conviction.

Often, the harshest sentence associated with an arrest is not a term of incarceration. Instead, it is the shadow of an arrest record that follows a person after a touch with the criminal justice system and saddles them with consequences that linger long after they walk out of the criminal court. When it comes to employment, this sentence is all-too often imposed even before the resolution of case, as a mere arrest routinely results in job suspension, loss and denial while charges are pending. As a result, NDS clients are forced to make a decision: enter a plea to invoke the employment protections of the City’s current Human Rights Law in order regain their livelihood, or exercise their right to contest the charges against them.

For many NDS clients, employment consequences are automatic, triggered by an arrest regardless of the eventual outcome of a proceeding. For instance, information about a client’s arrest is often transmitted directly to their employer by city and state licensing and regulatory agencies as soon as it happens. In many cases, it is the employer or agency’s practice to automatically suspend our clients while charges are pending, despite the nature of the charges. Additionally, a job hunt can be put on hold for months while clients assert their innocence in criminal court because open charges appear on a background check. For these clients, there is no such thing as innocent until proven guilty – the fact of a charge is enough to strip them of their ability to support themselves and their family.

Moreover, these consequences persist even when a court has entered a disposition that absolves our clients of any criminal responsibility such as an Adjournment in Contemplation of Dismissal (“ACD”) or a violation. An ACD is essentially an administrative order entered with the consent of both the defense and the prosecution. Requiring no concessions or admissions, the order adjourns a case for administrative dismissal and termination of the charges after a certain period of time – most typically, six months – without any future court appearances or conditions. Although an ACD may be revoked and a case re-opened if a person is re-arrested within the adjournment period, it is NDS’s experience that nearly 100 percent of ACDs are dismissed as scheduled. However, regardless of the inevitable dismissal of an ACD, many NDS clients face persistent employment barriers during the adjournment period because an ACD technically appears on background reports as an “open” case until the actual dismissal of the charges. Likewise, a violation disposition is a non-criminal resolution of a case that automatically seals; however, until sealed, employers often times unfairly impute criminal responsibility based on charges that ultimately were not sustained.

The proposed amendments are a significant step toward reducing the stigma associated with a mere arrest by providing workers who are contesting charges with the same protection available to individuals whose charges resulted in a criminal conviction and removing many of the barriers posed by an arrest not resulting in a criminal conviction. However, in order to truly pave the road forward and address the persistent discrimination experienced by people like NDS’s clients, this Committee should consider incorporating several key changes to the amendments. Specifically:

New Yorkers who are presumed innocent should be afforded every opportunity to find and hold meaningful work in order to support themselves and their families. These amendments open significant doors to those ensnared in our expansive criminal justice system. However, we urge this Committee to consider incorporating language that ensures both applicants and current employees are broadly covered under provisions restricting discrimination based on charges, ACDs, and violations and, additionally, limiting exemptions only where they are explicitly required by law.