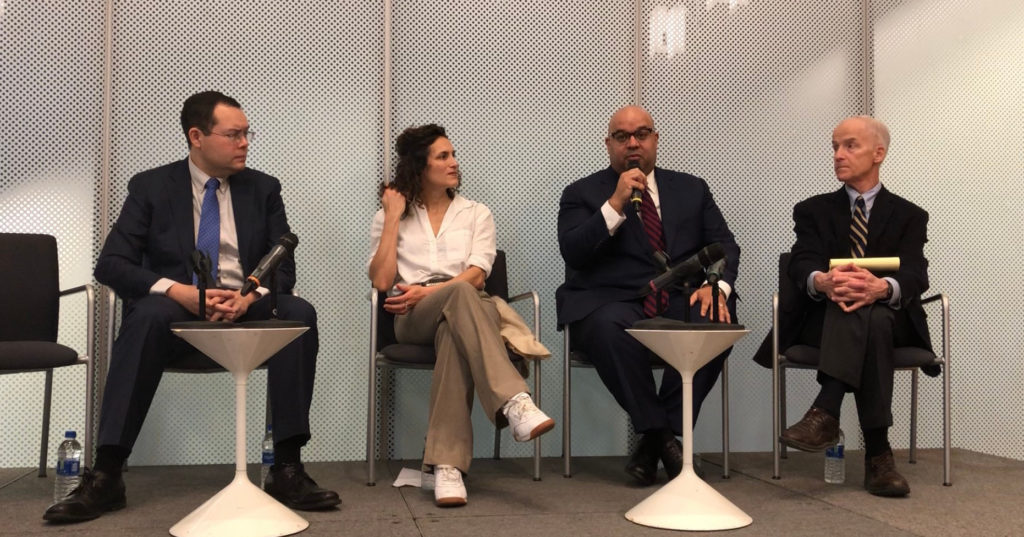 Seth Steed, Managing Attorney of NDS’ Criminal Defense Practice, says the structural inequality of the criminal legal system is immediately apparent. Just walk into any courtroom and look who’s there.

“If you go into a courtroom it will wash over you when you look into the crowd,” Steed said “It’s only black and brown and poor people.”

Steed was addressing the audience at the 14th Annual John Jay/H.F. Guggenheim Symposium on Crime in America, which gathered media members and practitioners for a discussion of the criminal legal system. The Symposium was held at John Jay College in New York City.

Steed spoke on the February 22nd panel on holistic public defense, where he was joined by Issa Kohler-Hausmann, author of a new book Misdemeanorland, and Tom Reed, director of Milwaukee’s public defender office. The panel was moderated by Paul Heaton of the Quattrone Center for the Fair Administration of Justice.

The panelists discussed the huge racial and socioeconomic disparities in prosecutions in the United States. They pointed to the key role that public defenders play in both removing their clients from the criminal legal system and in shaping policy that responds to their clients’ needs. All three agreed on the need for more public resources for public defenders, noting that heavy caseloads hurt clients and communities.

The holistic public defense model is “the way the work should be done,” says NDS’ Seth Steed. #crimesymposium pic.twitter.com/0mFy8ULr1F

“Each case is staffed by a team,” Steed said. “We don’t just look at the case, we look at the person. We want to try to figure out how to get you out of the criminal legal system completely.”

Steed explained that not only does NDS’ holistic model work, but that it is getting nationwide attention: on February 21, NDS announced that it was selected to open an office in Detroit. The new office will provide the same unparalleled service to the people of Wayne County.

On Friday, NDS’ Seth Steed spoke to #crimesymposium at @JohnJayCollege about the key role of public defense. Watch: pic.twitter.com/W8DLS9RJUp

Steed also noted that NDS staff are enmeshed in the community, attending public events and hosting events designed to help keep their neighbors safe. Steed himself, an East Harlem native, said that he first learned of NDS through a Know Your Rights training the organization held at a basketball tournament.

The event ended with the speakers agreeing on the importance of public defenders having a voice in policy discussions.

“It’s a very exciting time for indigent defense and for discussions around mass incarceration and how we end it,” Steed said. “And the role of the public defender in that discussion because we’re the only people actually talking to clients and listening to them.”