NDS Staff Travels to Albany to Fight for Harlem Families 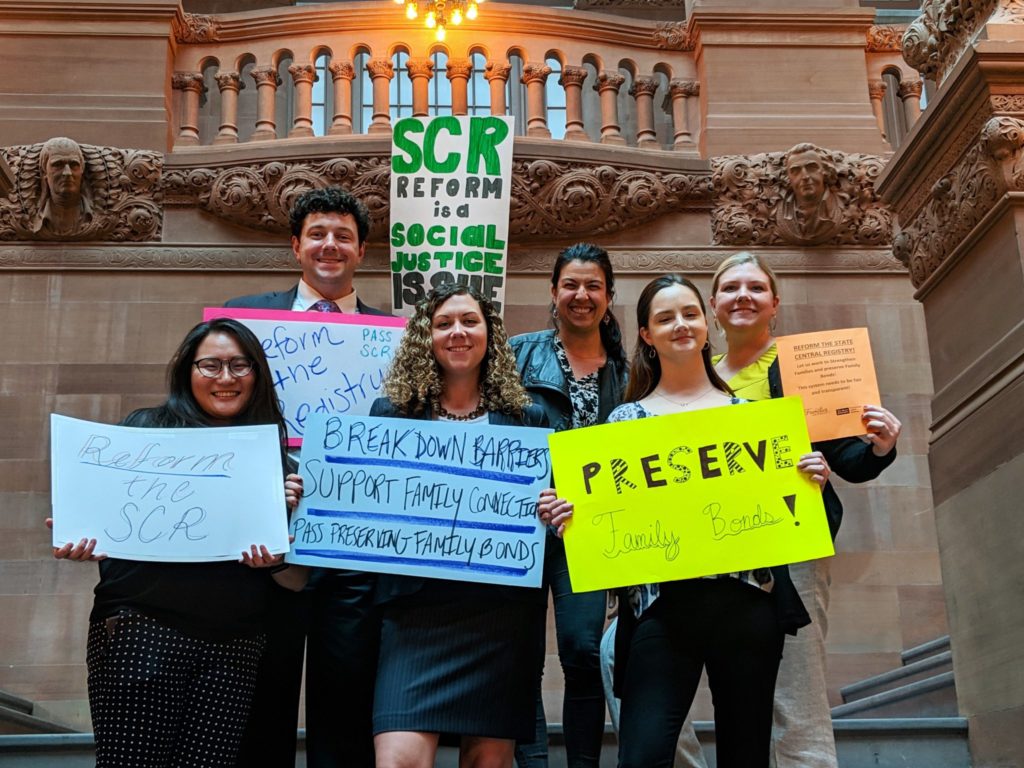 Last week, NDS traveled to Albany to fight for families alongside fellow defenders, activists and the people of our communities. The message to legislators: pass two critical laws meant to preserve family bonds and end the collateral consequences caused by child service investigations.

In Harlem and neighborhoods across New York, communities fear intervention from the Administration for Children Services (ACS), and with good reason: the child welfare system investigates poor people and people of color disproportionately high rates. It is a question of who gets the benefit of the doubt.

When court cases end in the termination of parental rights, that unfortunately includes an end to all visits or contact between parent and child. They also result in a parent’s placement on the State Central Registry (SCR) for decades, often without due process, precluding parents from many jobs and traps them in poverty.

NDS and our fellow advocates traveled to Albany to make clear the need for two laws: the Preserving Family Bonds (PFB) Act and the State Central Register Reform Act. The PFB Act would give judges the discretion to allow parents and children to see each other after parental rights are terminated, if the judge determines that it is in the best interest of the child. Currently, when those rights are terminated, all contact between parent and child ends. By limiting the judge’s ability to act in the best interest of the child, current law further traumatizes parents and children alike.

Family defense advocates also urged legislators to mitigate one of the more pernicious collateral consequences of ACS investigations. Currently, even an unsubstantiated allegation of neglect or maltreatment can result in a parent being placed on the SCR, where they will remain until their youngest child turns 28 years old. These allegations often never get to court and are not substantiated by a judge, but placement on the registry reverberates for decades, severely limiting our clients’ employment options and preventing them from taking in their loved ones’ children. This amounts to a gross violation of due process, deepens poverty and invites the potential for intergenerational trauma. For instance, if a grandmother is on the registry, she may be unable to take in her grandchild if her son or daughter is investigated for any reason.

The Act makes the registry far more fair by automatically sealing indicated reports of neglect after five years and automatically sealing SCR reports when a judge determines that there is insufficient evidence of abuse or neglect. It also allows judges to consider evidence of a parent’s rehabilitation when evaluating whether to seal an indicated report.

The advocates traveled to Albany and met with dozens of lawmakers to discuss these bills. To make their case, they leaned on their experiences serving clients or their own interactions with the child welfare system.

“[I can’t count] the number of times I get parents calling me saying ‘I got this weird letter, what does this mean? I never got taken to court, why is my name on this registry?’ Or: ‘I applied for a job, my name came up and they can’t hire me, but I’ve never had an ACS court case,’” said NDS Parent Advocate Ayami Hatanaka. “It happens without any court jurisdiction, which is absolutely appalling. The number of people calling our office about this in Harlem is unbelievable.”

Others noted the growing awareness around the need for criminal legal reform. They said that the child welfare system harms the same communities threatened by the criminal legal system, and called for similar action to mitigate its damage. “A lot of the same practices and policies [that impact criminal justice] are going on in the child welfare system,” NDS attorney Jessica Brierly-Snowden told Mark Mishler, counsel to State Senator Julia Salazar. Brierly-Snowden went on to draw a line between ACS investigations and stop-and-frisk policing. “There’s a lot of over-policing in the system, just like the criminal system. It’s affecting poor people and people of color all over New York City,” she added.

Salazar signed onto both bills the following day.

The trip to Albany concluded with a rally featuring the bills’ sponsors and parent advocate Joyce McMillan. “I’ve been so touched by all of the stories, the families, the mothers, the children who had to continue to fight to preserve their family bonds,” said Assembly Member Latoya Joyner, sponsor of the Preserving Family Bonds Bill. “I am glad that [through] this piece of legislation we will continue to fight for them and will get them the results that they need, for the best interests of the children.”

NDS urges the New York State Legislature to pass both bills before the close of the legislative session next month.

Stay tuned for updates in the weeks to come. You can support our efforts to keep families together, where they are safest, by donating here.