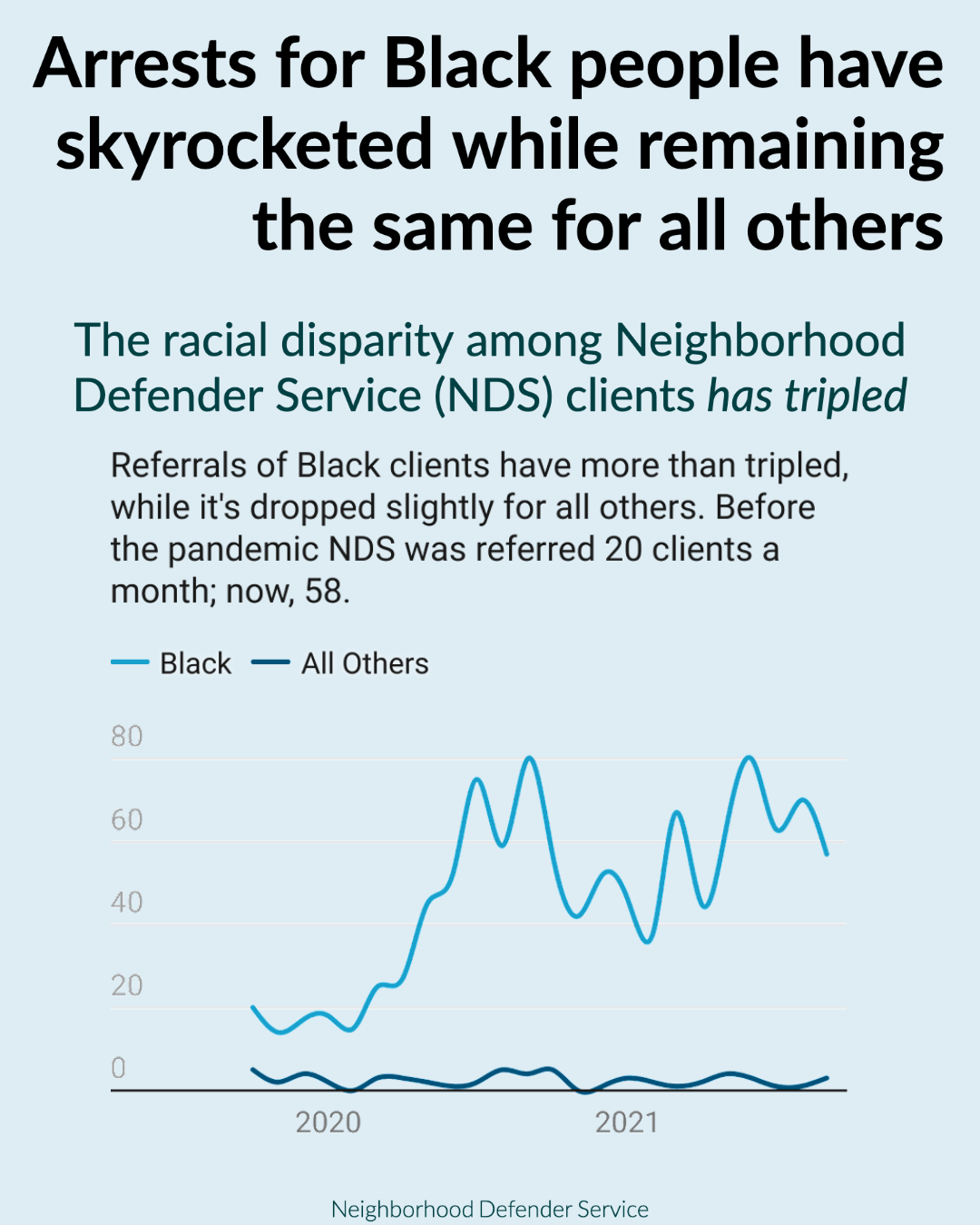 (DETROIT, MI) – Data from the court system, publicly-available arrest data, and data from Neighborhood Defender Service (NDS) together expose a legal system targeting Black Detroiters for arrest and prosecution, advocates explained at a press conference today. The number of arrests on CCW charges has quadrupled since March 2020, and 97 percent of those with the crime charged are Black. The volume of these prosecutions is targeting vulnerable Detroit communities and slowing the legal system to a crawl.

Arrests for CCW-only offenses have quadrupled since the pandemic began. Between January 1, 2018 and March 2020, DPD arrested an average of 256 people on CCW-only charges per quarter. That number has surged to 1017 arrests for CCW-only per quarter. The arrest rate for CCW-only offenses has more than doubled in every area of the city, but the rise is especially concentrated in the midtown, downtown, and Greektown neighborhoods, where enforcement is up almost 700 percent.

The spike in arrests has coincided with a surge in prosecutions. Before the pandemic, roughly six percent of cases charged by the WCPO in the 3rd Circuit Court were CCW-only charges. In August 2021, that number stood at nearly 30 percent – around the same time that Kym Worthy lamented the “inhumane” caseload her staff decided to prosecute.

These prosecutions are racially disparate. NDS represents people in 25 percent of the felony cases filed in Wayne County. Since March 11, 2020, NDS’ referral rate for Black clients facing CCW-only charges has risen 205 percent; the referral rate for all non-Black clients facing the same charge decreased by 8 percent. Today, 32 out of every 33 CCW-only prosecutions in Detroit are Black people, according to Third Circuit Court data.

Beyond the racial bias, the deluge of new, CCW-only prosecutions has created a backlog of over 3800 cases in the 3rd Circuit Court. The 36th District Court was forced to establish two additional dockets to handle CCW-only charges, and the Third Circuit Court has set up an annex staffed by 7 civil judges working out of the Coleman A. Young Municipal Center.

Despite the additional court resources the Court has spent handling this influx of cases, the speed with which it handles cases lags woefully behind. Michigan law provides that people accused of a crime have a day in court within two weeks of arraignment. Before the pandemic, NDS clients usually had their first hearing within the week. Since July 2021, the average wait for NDS’ CCW-only clients has been over three months. This delay extends across the legal system, jeopardizing the court’s ability to meet people’s constitutional right to a speedy trial.

Those accused of CCW are not charged with any other crime, which advocates say underlines that these prosecutions are not about preventing gun violence. Instead, they insist that arrest and charging practices amount to “Stop and Frisk” on the streets of Detroit, targeting Black drivers for arrest and prosecution en masse.

These offenses are non-violent in nature — those accused allegedly committed technical violations in how they store or carry their gun. Police in these cases will commonly pull Detroiters over on a pretextual stop, like a failure to signal or tinted windows, and immediately ask if there is a gun in the car before even asking for license and registration. If the gun is stored in any way improperly – for instance if the gun is in a locked glove box instead of a locked case, or if the case isn’t stored in the trunk – then the driver is arrested and charged with a felony. Based on an analysis of public defender case data, approximately 70 percent of the guns in question are legally-owned.

The data was presented as part of a coalition including Detroit Will Breathe, the National Conference of Black Lawyers, Wayne County Criminal Defense Bar Association, ACLU of Michigan, the Cochran Law Firm and NDS.

“Here we go again. Black Detroiters are being targeted with racially discriminatory policing and prosecution in their own community. Instead of clogging our overburdened court system with non-violent felonies that make us no safer, we should listen to the advocates who are calling for systemic change,” said Representative Rashida Tlaib. “We make our communities safer by investing in them and the people who call them home, not by doubling down on overpolicing and mass incarceration.”

“The data shows that these extreme measures of policing, which disproportionately impact the lives of Black Detroiters, have not led to a reduction of gun violence and has instead unnecessarily put people into the criminal legal system and impeded right to due process,” said Council Member Gabriela Santiago-Romero. “Detroiters deserve policies and practices that support and protect them in just and fair ways. We need to change our approach and tackle the root causes of crime. We need to invest in programs and services to address poverty, mental illness, and homelessness.”

“In practice, CCW charges in Wayne County are not about public safety at all. In fact, the data indicates arrest and prosecution for driving while Black. These arrests of otherwise law-abiding citizens is what our legal system has spent so much of its energy on while COVID wreaks havoc on our communities,” said NDS Detroit Managing Director Chantá Parker. “It is frightening to think about the nights our clients – almost all of whom are Black – have needlessly spent in jail on CCW charges during the COVID crisis, or the harm their families have endured for months as the threat of prison hangs over their loved ones heads, or the job opportunities these charges have endangered. This harm is the direct result of policing and charging practices. We demand an end to these harms, starting with Prosecutor Worthy dropping these CCW charges immediately.”

“There is an appalling, tragic irony in the fact that in 2014, former police chief James Craig urged Detroit residents to arm themselves to ensure their security, and the fact that the police force he led now uses weapons possession as a basis for arresting Black people who arm themselves,” said Mark P. Fancher, the ACLU of Michigan’s Racial Justice Project attorney. “If in carrying out what may be racial profiling missions the police are functioning as gentrification enforcers, then law enforcement has lost its way and needs an immediate course correction.”

“What we know is that gun control has historically only been enforced against Black people. It has always been a means of harassment and basis for the jailing and targeting of Black communities,” said Nakia Wallace, co-founder of Detroit Will Breathe. “At a time when the people of Wayne County and Detroit so desperately need resources to combat the effects of a pandemic, we are instead being subjected to racist stop and frisk policies.”

“This issue does not arise in isolation. Historically, Black citizens have not been fully protected under the Second Amendment. After the civil war, several states passed gun laws that were almost exclusively enforced against Black people and designed to keep guns out of their hands.  The data presented here today shows that the City of Detroit and Wayne County are continuing this deplorable trend.  It must be stopped,” said Jeffery Edison of the National Conference of Black Lawyers. “Kym Worthy, as the Wayne County Prosecutor, has the authority and legal obligation to intervene and implement policies of meaningful oversight and review of police investigations that seek charges for carrying concealed weapons. The racial disparity in Detroit police law enforcement practices that reek from the compiled data must end.  The call to dismiss all CCW-only cases is the first step to ending the unfettered abuse of police authority.”

“On behalf of the private bar we are appalled by the aggressive actions that seem targeted at black and brown people. The tinged talking points we have been bombarded with try to connect taking guns off the street (from some people) with making the community safer,” Lillian Diallo, President WCCDBA. “What that talking point ignores is that most of the people who have these charges are law abiding citizens, gainfully employed with NO prior criminal history carrying legally purchased weapons. These are citizens that are entitled to feel safe as well. How, in good conscience, are prosecutor’s charging 5 year CCW felonies in the county of Wayne when the CPL processes were shut down? Oakland and Macomb counties kept their CPL processes open and accessible to the public that they served.”

“Instead of locking these people up, the administration needs to focus on the violent crimes that pollute Wayne County. Instead of wasting tax paying dollars on convicting law-abiding citizens, this administration should use its resources to educate the citizens of Detroit and Wayne County on Michigan’s “open carry” laws and dismiss the cases for individuals that have legally purchased weapons and no criminal record,” James King of the Cochran Firm Detroit said. “What is most troubling about this racially biased policing and prosecuting is that it is being done in communities that are targeted for gentrification. The over policing in these areas make people feel unwelcome in communities where their families have lived for decades.”