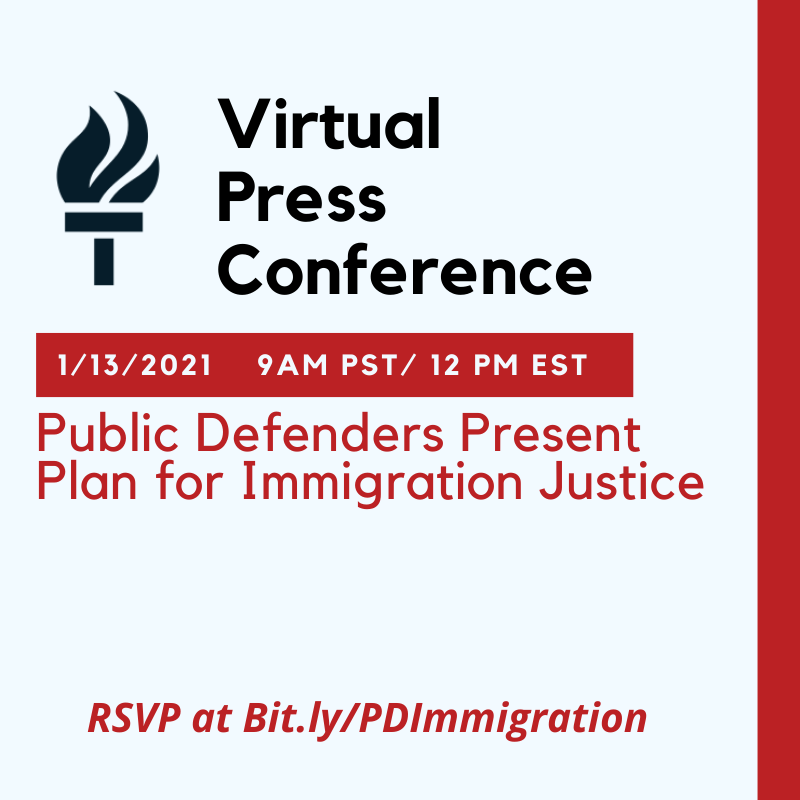 SAN FRANCISCO – Today, the Public Defenders’ Coalition for Immigrant Justice, a nationwide coalition of public defender offices, released a 10-point plan for addressing the injustices of the criminal legal system and its pipeline to deportation. The plan urges the Biden administration and new Democratic majority in Congress to act swiftly and decisively for immigration justice to undo the unjust, harmful and destructive tactics of the outgoing administration.

Public defenders are direct witnesses to the devastation that unjust state and federal laws cause our clients, their families, and their communities. The draconian policies of the last four years exposed the cruelty of the immigration enforcement machine, leading to a sharp rebuke at the polls, and public disenchantment with mass deportation. The Biden Administration has an opportunity to take a fresh approach to these important issues with immediate and bold action on behalf of our immigrant community members.

The Ten-Point Immigration Program recommends the Biden Administration immediately halt deportations for a year, reverse the inhumane Trump-era policies, and establish due process protections in the immigration courts. The plan implores the Biden Administration to guarantee legal representation for people in removal proceedings, to end the jail-to-I.C.E. pipeline, and to restore pathways to lawful immigration status. The plan urges an end to immigrant detention, a sharp reduction in funding to ICE and the U.S. Border Patrol, and an increased investment in our communities.

“Harlem and Northern Manhattan are world-renowned cultural hubs and vibrant places to live because of our immigrant neighbors. The past several years have been about weathering an unprecedented, hateful siege on immigrant rights and providing the best defense possible against the federal deportation machine. But with a new administration and Democratic control of Congress, we have an opportunity – and an obligation – to do more than defend,” said Alice Fontier, Managing Director of NDS Harlem. “This 10-point plan will roll back many of the most damaging policies of recent years, push back against ICE, expand immigrants’ rights, and curb the horrific treatment of immigrants in our legal system. We urge the Biden administration to take public defenders’ advice and implement this plan immediately.”

“We have lived four chaotic years of inhumane and antidemocratic immigration policies that have criminalized immigrants, wreaked havoc on families, and betrayed the very principles of inclusivity and tolerance that must guide our nation. The time is now to make change. As a first order of business, the Biden Administration must immediately end the jail to ICE pipeline, guarantee legal representation for all, and end the inhumane practice of detaining immigrants, which has no demonstrable effect on public safety, and has endangered the lives of those in custody.”

Derwyn Bunton, Chief Defender for Orleans Parish and Chair of the National Association for Public Defense

“Representation remains one of the most fundamental principles in our legal system. As public defenders, we know all too well the cruelty and injustice Black and brown people and communities of color receive in the name of justice. The increased criminalization of immigration the last four years has not only been misguided, it has furthered the harm caused by a mass incarceration system disproportionately focused on Black, brown, and poor communities. The time for change is now.”

“As public defenders who represent immigrant clients, we have witnessed firsthand how the “War on Drugs” and decades of over-policing of communities of color, coupled with immigration laws and enforcement policies that disproportionately target immigrants with criminal histories, have resulted in unjust deportations, separation of families and untold damage to our communities. We urge the Biden administration to think beyond “good” or “bad” immigrants and adopt policies which recognize that all individuals deserve fair treatment, due process, and the opportunity for rehabilitation and meaningful participation in our society.”

“Our platform calls for universal representation of immigrants facing deportation, because when the stakes are often literally life, death, or permanent family separation, no one should be deported simply because they couldn’t afford an attorney. We need to change, shrink, and defund the deportation system and reinvest in our communities. ICE enforcement, detention and other cruel immigration policies tear apart families, and we urge the Biden administration and the new Democratic majority congress to listen to our neighbors’ voices.”

“This immigration system has done so much harm to so many people living in this country, including myself. With the new president, we need to make sure that no one goes through what I went through. Not one more person should be forced to suffer in immigration detention for months and years just because of where they were born. ICE puts fear into our community by terrorizing our hard-working immigrant neighbors and locking people away and deporting them away from their families. This agency should no longer exist. Instead, the Biden administration should keep our families and communities together by allowing people to live here legally with equal rights.”

Here is the link to the Public Defenders’ Coalition Ten-Point Immigration Program which includes all signatories.

Here is the link to the recording of the press conference held on January 13, 2021.